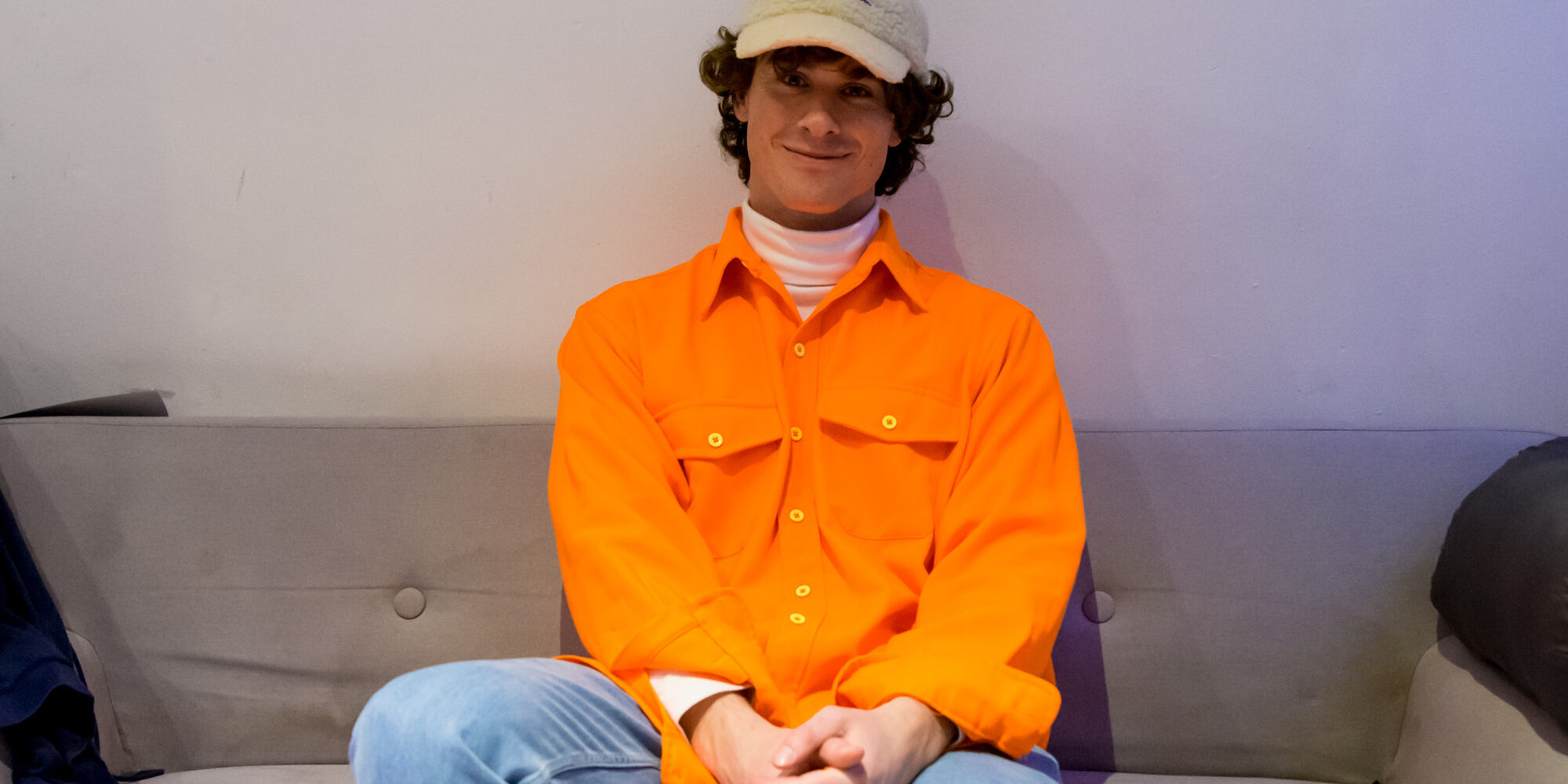 Interview is available in english just by clicking on the box below!

English version
M : Hello how are you ?

Rob Damiani – Don Broco – Singer : Good thanks, a little bit ill, i’ve got a little cough. Yeah at the start of tour we all got really cold… yeah I don’t think we realized we weren’t quite prepared to how cold Spain would be… we think ‘oh Spain! sunshine! beautiful!’ and we got there and it’s like january so… yeah we didn’t bring enough warm clothes with us. so we’re feeling a little bit sorry for ourselves, but apart from that the tour’s been pretty great.

M : The tour is doing great, since the beginning ?

R : It’s been strange some of the shows, without Simon on stage because Simon had the flu. Unfortunately we had to cancel our show in Poland cuz he was just feeling.. He couldn’t even hold a guitar, he couldn’t even walk, but the other show we had him in the backstage, and he’s been sort of playing in a little room and we would be on stage while he was in a little room backstage playing. It’s always a little bit strange on stage cuz I’m used to having him next to me but the crowds have just been amazing, they’ve helped us through the weirdness by gibing us so much energy pulling us through the shows, it’s really cool.

M : Okay cool! So we saw yesterday that you released HALF MAN HALF GOD, so just right on time for the show tonight! Will you play it tonight ?

R : Yeah it’s gonna be the first time we’ve ever played it tonight, so we’re excited to give it its big debut here in Paris would be very cool.

M : So the song is very fast, dynamic and there are some screams too, so will it represent the next album ? because I assume it’s for the next album.

R : Yeah! it’s hard to know really. I mean this is just one song we wrote, we haven’t really started getting into the album. We wrote this song on the last tour we did in america, we were with Mike Shinoda in the States for about 6-7 weeks and we had a few days off and we just thought « we’d love to play some new songs on this tour. So we just kinda tried to write and we don’t usually write on the road, we find it quite annoying because you’re in a little small bus and it’s nice when you’ve got a bit more freedom and think through an idea, let it lie for a bit and come back to it. We like to be a bit more leisurely but we thought we’d try writing this new song, get it recorded in time for the tour and yeah we’re excited to play it’s gonna be fun. It’s always fun for us refreshing up the set and getting new things in so it’s definitely the start of new material for an album. Who knows where the album is gonna go yet but yeah this would definitely be on there.

M : Ok cool. So do you have any fun facts to share about the making of this song ?

R : I mean yeah, it was very kind of quick. I think it kind of came together in two or three days on the bus and yeah it started not sounding like anything it sounds like now. It started like sounding almost like Earth Song by Michael Jackson. When we came up with the chorus we were like « wow this sounds too much like MJ we gonna get sued by the jackson estate! BUt any of our songs, once they’ve gotten the full Don Broco treatment the end up sounding nothing the original idea but who knows! It was just something we just wrote in the bus and we were jamming it kind of shouting along just energetic.. Whenever we’re on tour we end up writing kind of quite energetic fun songs because that’s what you want to be doing, because that’s why you’re thinking about playing all the time… So yeah it definitely didn’t sound anything like it did originally but then once we got the arrangement of the verse chorus dynamic we just wanted to kinda heart it as possible.

M : So what do you except from your French fans tonight ? Because we saw that the show has been completely sold out for a long time!

R : Yeah! it’s gonna be really cool like we played paris last may i think

R : No doing our own show

M : We missed it! I remember when you were opening for Bring me the Horizon

R : Yeah that must’ve been two or three years ago…

M : In July last year you were at Lollapalooza festival Paris !

R : Yes we did Lollapalooza, that was really fun. And we were here in May doing a headline show at the Nouveau Casino. And that was a really fun show, it was one of my favourite shows of the tour. Everytime we go to France, especially Paris, it’s the best so…

M : So have you already planned to come back for a festival ?

R : We ight be coming back, we haven’t got any plans yet. We’re hoping this summer to be able to have a little bit of time off and write some new songs, start writing the next album… We might be coming back. We kinda just want to lock ourselves away and come up with some new stuff. We’ve been touring pretty much non-stop for the last year so it’d be nice to have a bit of time off.

M : Speaking of technology habit, what’s your favourite song from the album to play live ? If you have one

R : It’s a tough question because it changes really, it depends. Pretty is always fun to play, pretty and everybody are so high energy, the crowd goes wild, and they’re pretty fun songs. But then there are some new songs that we started playing that are fun to do… Tightrope, we’ve been trying that in the set a little bit and got to be you is really fun. So I think we’re going to play got to be you tonight but we don’t play it all the time but we’re gonna give it a go tonight. It sounds a little bit different from the set so it’s a nice pace changer, you know when you got so much energy stuff. Most of technology is pretty loud and fast and then you got something a little bit more relaxing. It’s kinda nice to bring things down so yeah that’s a good one.

M : Are you gonna play old songs for the fans ?

R : Yeah! we always try to do a little bit of mix so include some of the other albums as well for everyone who’s been with us throughout the years so yeah mix it up! But i mean a lot of tehcnology this time because it’s the first proper time we’ve done a full tour with technology so that’d be cool.

M : We’re excited to see that tonight! On Error404 we are speaking about video games, movies and tv shows, and we want to know you a bit more. So could you recommend us on artists that you’re listening atm ?

R : I’ve been listening to the new Bring me the Horizon record which is awesome, though I think everybody knows about that already. But that’s wicked and it came out recently so i’m loving that. There’s a hiphop collective called Brockhampton, from the states, who I’ve been listening a lot to recently. they’re really fresh, really exciting. There’s so many members, like 20 members or somehting. And not all of them rap, some of them producing, and having various functions in the group which is really cool. Liek they’ve got their photographies down and all of their visuals as well. So it’s a creative collective but they’ve got so many people who do sing and rap as well they just sound so fresh. There’s a lot of different voices, different textures and flavors going on within the song, which is always something exciting to look for within three or four minute songs so yeah brockhampton.

M : Is that a thing you could think about ? Making a collective with many rock musicians ?

M : So which people do you pick for this band ?

R : You’d want all your friends in here. So definitely the Bring me the Horizon guys, I’d love to bring all our buddies growing up within the uk and the uk scene, You me at six, get those guys down, um my favourite band Biffy Clyro… I love the new Tøp album, this is sick as well so these guys, Deaf tones, why not Fall out Boy and get them in there cuz they are into collaborations as well. They collaborated with the everytime i die guys, why not issues, who else could we bring in… Brendon Urie definitely! You gotta have some Panic! at the Disco.

M : Do you have a collaboration in mind for the next album, maybe ?

R : We definitely got a few people that I did mention in that list, but I don’t want to ruin anything. We got some works already actually. We’re sorting out and I don’t want to give away too much because I don’t want to ruin the surprise, but we’re bringing in a couple of friends for one song. We’ve written this song and we just thought we’ve got a few people we thought would sound great so we’re gonna get them involved and they’re gonna record their parts soon to it and that’s going to be a fun party song. When that’s ready, I think you’re going to hear all these different voices in there so it’s going to be a collaborative work.

M : Do you have a favourite movie ?

R : So hard, I love movies so pinning one movie is so tough but I think there had to be one favourite movie of all time it’d have to be the dark night like the feeling it gave me when i saw it for the first time in the IMAX. I’m a huge Batman fan anyway, huge comic book guy but i love my kind of gritty thriller crime films too, so for me the dark knight was this perfect blend of fantastical superhero movie yet set in this real sort of gangster real epic world. I love gangster movies as well and it’s got a real feel and obviously there’s no better villain than Heath Ledger’s Joker, he’s still top of the tree for me. Any real good movie for me. You don’t need a bad guy and a good guy but you know a protagonist and an antagonist and the clash between them is just so good so definitely that. I just love anything by Christopher Nolan. He’s just one of my fav directors, he can’t do any wrong, Momento, Inception… I just love everything he’s done.

M : And to finish, maybe one video game ?

R : Um I think if it had to be of all time, it’d be Ocarina of Time bc it’s just so classic innit. it held such a special plac ein my childhood growing up. It was this incredible world and the first time I played it on my game boy as well when I was little, to see that 3D world visualized for the first time and that which is really good. All of the zelda games have been good up until now. I don’t have much time to play now but new games… I haven’t played it loads but Red Dead Redemption 2 is fucking sick. I mean I love the wild west and cowboys and anything like that.

M : Well thank you very much for your answers!